I was recently driving by a local construction site and found myself enamored with the happenings. It looked as though the foundation had been poured and set for the building and the county inspector was giving the once-over to this completed phase of the project. He had his clipboard with a checklist and was sure to point out things that he wanted an account of from the site manager. Of course, without his approval, the project would not continue as planned and the necessary changes would have to be made in order to receive a passing grade. In that moment, I was grateful for the amount of time being taken to inspect the foundation of a building that was sure to become a support for a building that would serve the public (including me!). But it made me wonder, why don’t we take more time to inspect the foundation of those people around us that will be the “support” of our public?

Leaders are the support structures for our companies, organizations, governments, and families and we should be much more aware of what is going on underneath the surface if we are going to lead effectively. 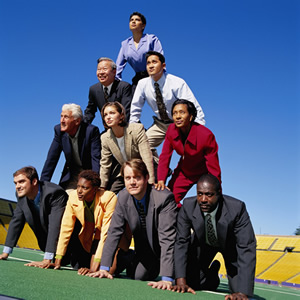 Leadership consultant and author, Dr. Myles Munroe, describes a person’s character as the foundation of the structure that is being built. Of course, as with any construction project, if the foundation is cracked or compromised in any way then the building will not pass inspection. Why do we insist on applying different rules to leadership? After all, doesn’t the same maxim ring true?

Our character is our foundation. It is the compilation of our core values, our attitudes, our experiences, and our strengths. Our character is what makes us distinctive and original. The word “character” also serves another purpose in our language, though. It is the word we use when we reference the role that an actor plays in a movie or theatrical production. So which version of the word do we reference when we talk about leadership? Are we more concerned with the foundation of a person’s morals, beliefs, attitudes, and experiences? Or are we merely concerned with how well they can “play the part”?

If we agree with leadership expert John C. Maxwell’s famous maxim, “Everything rises and falls on leadership,” then it is a leader’s character, at the foundational level, that determines the effectiveness of the organization not how well they play  the role as a leader of others.

A foundation only serves its purpose when it supports that which has been placed on top of it. That is its function. If it begins to shift or collapse, then everything that is relying on it to be a solid support will begin to fall apart as well. One need not look too far into the past to see the life of Bernie Madoff as an example of someone who posed as a leader of financial stability for investors, but whose character was revealed over time to lack the integrity to hold up the responsibility those investors had placed in him. For all those that invested their money with Mr. Madoff, life began to shake and shift in ways that they hadn’t imagined or desired. Many lost their entire financial savings, never to be returned. What’s the lesson here? It’s easy to miss something you’re not looking for. If we never check out what lies beneath the surface of the building, then we’ll never know if it’s worthy of the trust we’ve placed in it.

There exists a real crisis in the leadership of our world today, and it’s due in no small part to the idea that we can play the role of a leader instead of becoming a foundation that’s worthy of the responsibility that’s entrusted to our care. If we want to see a change in the culture of leadership in our world, then we’ll have to command our character to come up to a higher level of solidity and strength.

There exists a real crisis in the leadership of our world today, and it’s due in no small part to the idea that we can play the role of a leader instead of becoming a foundation that’s worthy of the responsibility that’s entrusted to our care.

Coaching Question:
What is one area in your character that needs to be strengthened in order to support the responsibility of what/who you desire to be leading and how can you take steps today to improve that part of you?

One thought on “Foundational Leadership”