On Saturday, my family buried my grandmother. She was 87-years old and lived a seemingly simple country life. She gave me many gifts but none as great as the knowledge that hand-me-downs might be the clothes you’re given and also the story your living. 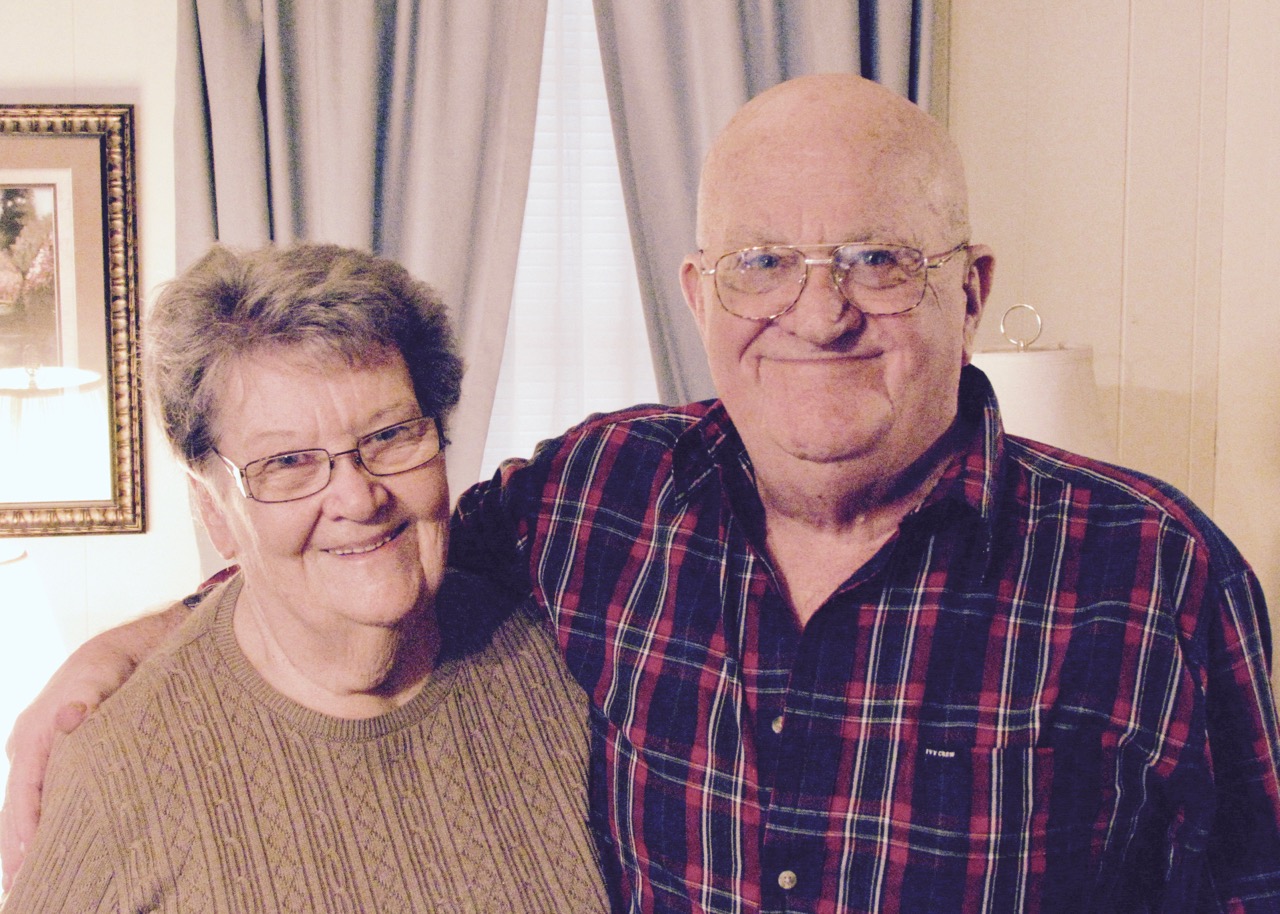 My Grandma and “Pop” celebrating a Happy Thanksgiving in 2012. They both passed this year in 2017.

I write this as her “special” grandson. The one who, all the way until her last day of dementia-laden consciousness, was recognized as, “Jeremy…he’s so sweet. He loves me,” said in her most-affectionate tone of voice. So, these aren’t the ramblings of a jaded and unloved family member. These are the observations of a grandson who threw away the hand-me-downs of unworthiness he was given to take hold of the inheritance of worth he always possessed.

For as long as I can remember, she never lived close. She was always a road trip away. Some of my earliest memories are packing in the car with my mom, dad, and brother to visit my grandma and her husband (I called him “Pop”) in some rural, small-town location. They weren’t much for the city or the people who dwelled there.

Even as a young boy I noticed the tension. It predated my existence and never really left.

THE ORIGIN OF TENSION

My mother had given birth to a son before she married my father. It was a difficult set of circumstances (or so I’ve been told) and my mother needed help raising her newborn while securing much-needed income for their survival.

My grandmother obliged and consented to give my mother the help she needed. At the time, my grandparents lived in Tennessee but my mother wanted to build a life in St. Louis, Missouri. So, when her son was just a couple months old she traveled to St. Louis to secure a job and a place to stay while my grandmother looked after the baby.

It took my mom 5-6 weeks to get everything in order and then she returned to Tennessee to retrieve her son and bring him back with her to begin their new life together. And that’s when the trouble began.

Upon her arrival, my grandmother refused to allow her to take the baby with her and sent my mom back to St. Louis without her son. My mother was petrified. Caught between a relationship with her mother and the right to be a parent to her own son. She didn’t know what to do. And as happens to so many of us when we become confused, she didn’t do anything.

She was immobilized by fear. On one hand was the fear of waging a legal battle with her own mother across state lines which surely meant that her son would endure a time in foster care while the court sorted out their predicament. On the other hand was the fear of losing a relationship with her mother whose approval and validation she so sorely craved and never received. What to do?

By the time I arrived on the scene (three and a half years later), the story had grown to include my mother’s marriage to my father and my subsequent birth. My half-brother was still being raised by my grandma and her husband in some other place and when we visited, or on the rare occasion they visited us, my brother (who arrived 15 months after myself) and I were instructed to address him as our “cousin.”

Even as a child I remember thinking, “Is this real?” It felt strange. Like an armistice between two warring countries. The war was still being waged in their hearts but no longer in their lives.

As I grew older and learned of the reality of the situation, it became even stranger. My half-brother (a.k.a. my “cousin”) was the family secret. The thing we dare not speak of. So much shame, fear, and silence built up over time that it seemed impossible for my mother to ever really move forward. My grandmother, ignoring the obvious hurt she’d caused, assembled a story that justified her actions based on her perception of my mother’s behavior. My dad and my “Pop” were the two guys who got caught in the middle of something they didn’t really want any part of (so mostly stayed out of). And my half-brother was written into a story that had little to do with his own wellbeing and everything to do with how his presence made my grandmother feel. (I don’t really refer to him as my “half-brother” in real life, by the way. It’s just easier for me to tell you the story this way.)

This became a doubly-difficult scenario since my grandmother’s actions were justified by her belief that what she was doing was “right” because Jesus said so. My grandma was known for her strong Evangelical faith and her affinity for Word of Faith preachers. Her car and house were flooded with cassette tapes of Bible teaching and southern gospel singers. Everything she did was in service to her “Christian” beliefs. After all, no one wants to go to hell, do they?

Family functions felt like the cold war. There was this nuclear weapon in the room that no one dares acknowledge but that got in the way of every attempt to connect and care for one another. No one had the nerve to bring it up for fear of the fight that would ensue.

The tension was real and it created an environment that marred our collective reality.

Questions upon questions. Secrets upon secrets. Suffering in silence. Ashamed of the darkness that could so easily have been brought into the light.

The war within my grandma was the war so many of us fight every day. She felt unworthy of what her heart desired so she sabotaged life’s efforts to bring her happiness. Her actions made her feel shame and the fear that shame created made her seek comfort in religion while keeping the truth from being set free. The struggle was real.

My grandma loved me something fierce, though. Did I mention I was her “favorite”? She always made me fried chicken with her special gravy (even though I found out later that she didn’t much care to cook). She always ignored my younger brother’s storytelling when he accused me of doing him wrong (although, I may have taken advantage of this a few times). She liked to talk to me on the phone about my accomplishments in school and sports and she never hesitated to let everyone know how proud she was of my being a “Man of God” when I was a pastor. One thing I’ll never forget about my grandma is that you could always count on hearing the phone ring before you went to school (or later to work) on your birthday and how after you’d pick up and say, “Hello?” she’d start singing “Happy Birthday to you…” and make you feel special.

I guess that’s what makes this complicated, right? None of us are all good or all bad. And none of us are without fault, mistake, or failure. But all of us (no matter what we’ve done) have the ability to make someone in our lives feel special.

What I’ve come to realize is that we’ve all got the capacity to create and choose and become who we want in this life. But we can also live our whole lives unaware of it.

Near the end, my grandma’s normal mind was suspended by dementia. But it may have been my mother’s greatest gift since it allowed conversations to take place that had never before been uttered. Since my grandma’s inhibitions were released my mother was able to find some peace.

THROW AWAY YOUR HAND-ME-DOWNS 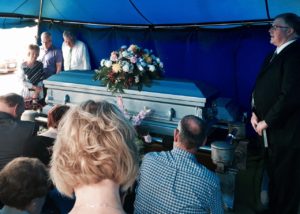 The minister speaks a few words of comfort as we gather under the tent on a rainy Saturday afternoon to say goodbye to my grandma.

My grandma’s passing serves as a reminder to me that life is short and avoiding the difficult conversations isn’t going to help anyone in the long run. That fantasy isn’t as useful as reality and humility is necessary if you want to create connection. That God is way bigger than religion gives Him credit for. That hand-me-downs might be the clothes you’re given and also the story your living.

My grandma handed down a story to my mom who handed parts to me. Like a pair of pants that were two inches too short with patches in both knees, I decided to take them off. I no longer wear the hand-me-down story of scarcity, fear, shame, silence, pride, religion, conformity, and unworthiness. I awoke to the reality that I inherited a much finer wardrobe of abundance, love, vulnerability, humility, freedom, spirituality, individuality, and worthiness.

And that’s what makes all of our lives complicated. We’re handed down stories from those that came before us that hide the inheritance of who we really are. Will you stay unaware of what’s hiding under the hand-me-down story you’ve been given? Or will you strip yourself of the clothes that no longer serve you and realize a whole new quality of living you never thought you were capable of?

My grandmother wore her hand-me-downs and never fully realized the inheritance of her own soul.

I’m throwing mine away. They never really fit me anyway. They were made for somebody else.

Question: Do you have any hand-me-down stories from your family that you’ve thrown away or need to get rid of? Unburden yourself by sharing your story with me. You can leave a comment by clicking here.