Taylor’s face is projected on the arena screen for all to see.

I had the good fortune to score tickets months ago for me and my daughter Emily to enjoy an evening with Taylor Swift during her 1989 World Tour in St. Louis on September 30th. My daughter was so excited that she could barely contain herself. And I, of course, enjoyed seeing her smiling face as we parked the car in front of the arena and got ready to share this wonderful experience with 15,000 friends.

I know Taylor’s music from the radio and the albums that my daughter owns, so I felt prepared for a fun night of sing-a-longs. What I wasn’t prepared for, though, but was pleasantly surprised to discover was just how much I was going to learn about the power of femininity that evening.

In a very masculine world that applauds bigger, better, faster, and stronger; competition as the way of life; and being focused on the task to the exclusion of the people around it, there are many things we can learn from the power of femininity when it’s allowed to come forth and lead. So, take a trip with me into the world of femininity and discover the power that its energy creates.

From the time that we exited our car I knew we were in for a delightful evening. There were semi-trailers parked on all sides of the entrance with Taylor’s tour logo on the truck so that everyone could enjoy getting pictures in front of them. Sure, her and her team could have left them blank and just transported the equipment from venue to venue and nobody would have said a word. But then, when feminine energy is present, it naturally enhances the experience that everyone can have. 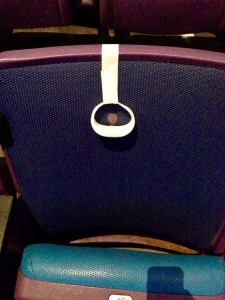 After we arrived at our seats, we saw a translucent white bracelet with a battery pull on every single seat and we thought, “Hmmm…I wonder what these are for?” My daughter leaned over to me and asked, “Daddy, what do you think these are going to do?” To which I replied, “Well, I think when Taylor comes on stage, someone at that control booth over there is going to press a button and they’re all gonna come on.” Not knowing if that was true or not, we both waited patiently for the beginning if her set to see if it was true. And as soon as the first few bars of “Welcome To New York” roared through the loudspeakers our mysterious bracelets lit up on the beat. It was pretty cool!

Now, she didn’t have to do this. She wanted to. She wanted to elevate the experience each and every person was having in this humungous arena where it would be easy for all of us to feel detached and faceless from what’s happening on stage. She wanted everyone who attended to feel special and connected to what was happening – and it worked! Every single song held surprises for our newly adorned wrists to illuminate and the glow in the arena was spectacular.

When feminine energy is allowed to lead, it takes an already awesome experience to a whole other level.

From the time we got close to entering the doors to the time we left the arena, there was something in the air that literally made us feel different. It’s hard to describe, but there was a tangible emotional energy that created an environment of both love and beauty.

For the most part, the fans were all enjoying one another’s company. There was a supportive feeling that doesn’t normally exist in everyday life that had people less worried about themselves and more conscientious of the people around them. Being a dad, I got to experience the kind of smiles and grins that I was able to both give and receive from the other fathers and grandfathers around me (which was a lot of fun). And it was noticeable how little bickering and aggravated energy there was compared to a normal trip to the arena for a hockey game. 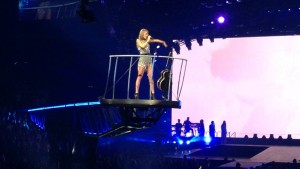 Taylor singing on her motorized stage

Some might write this experience off to the fact that since we were coming to concert instead of a sporting event that it attracted a different crowd — one that was more well-behaved and less competitive. But I don’t want to dismiss the power of femininity and how, when one woman and her team stand in their strength, it can literally alter the energy of the entire environment.

And then there was the beauty! From the moment Taylor took the stage, I was blown away by the visually stunning display the stage and production crew was able to create. Each and every single song had its own scene and the level of excellence applied to ensuring that it was not only an audibly pleasing experience but also a beautiful visual one was evident. As a former professional drummer and lifelong lover of music and concert experiences, I’ve never seen anything like it. The sheer beauty of each song’s setting was enough to inspire wonder in every single audience member.

Feminine energy shows its true power in its ability to create a space that both beautifies the surroundings and fortifies the hearts of those in its presence.

One of the most surprising moments for me was when we entered the arena. I’m used to coming in through the metal detectors and getting the gruff treatment from the security guards who always treat you with a little bit of distrust and a lot of indifference. But this time it was completely different. I stepped up to a guard who smiled and waived me through quickly, telling me to not worry about taking things out of my pockets because he would just use the wand to scan me quickly. What?! This was weird.

As the night wore on, I realized that it was not a fluke. Every single arena attendant I interacted with had a smile their face and some were even dancing and singing along during the show.

Me and my daughter Emily at the concert

As I kept my eyes peeled for more strange occurrences, I noticed that their were members of Taylor’s team roaming the audience looking for those over-the-top super fans who had dressed up to get her attention to reward them with spots on the floor closer to the stage. I even heard stories after the show from mothers who had been taken by street ticket scalpers for counterfeit tickets who were then given entrance by the tour staff because this has been such an issue during the tour. How cool is that?

While Taylor sang, danced, and played her way into the hearts of everyone there she also made it a point to take each and every opportunity to give thanks. Thanking the fans for her ability to make a living doing what she loves, thanking the audience members for coming to the show, thanking the supporting acts for opening the concert, thanking the tour staff for making it great, and thanking the city for being so enthusiastic about her visit. One of the morning radio show DJ’s in St. Louis said of her the next morning, “I think if Taylor Swift wanted to run for mayor, she would have everyone’s vote!”

Grace can be defined as the honor and favor that you bestow on another – not because they asked for it or earned it, but because you desired to give it. Feminine energy shines brightest when it models gracefulness and through that radiance invites others to do the same.

It’s time the women in our world were treated with more respect and honor for the energy they possess. In fact, that’s one of the huge reasons I recorded my audio program Girl Power (more on that in a bit). For too long we’ve ignored the power that feminine energy can provide in favor of a more masculine model of the world that produces more and more of what we don’t want — competition, war, control, and division.

What would it look like if we allowed more women to lead from their core energy of femininity instead of asking them to capitulate to a masculine model of the world that is out of alignment with their true power?

I think my daughter and I got a glimpse of it at Taylor’s concert. And I can’t help but wonder what our world would look like if we had more women in the lead. I imagine it might be better than we think.

Thank you, Taylor, for being a shining example of the power of feminine energy and what one woman can do when she stands in her strength and refuses to settle for less than what her heart tells her she can achieve. I, for one, am a dad who’s happy to say that I’m a fan.

Want to know more about what Girl Power can do for you? Click the button below to learn more about this compelling audio program that reveals the life-changing truths about the purpose of women and guides you in how to apply this knowledge to your life and relationships.

Question: Tell me what you think. What would it look like if we allowed more women to lead from their core energy of femininity instead of asking them to capitulate to a masculine model of the world that is out of alignment with their true power? You can leave a comment by clicking here.

5 thoughts on “3 Things Taylor Swift Taught Me About Femininity”