On December 5, 2013 the one and only Nelson Mandela passed away at the age of 95. As the world mourns the passing of one of the great leaders of our time, let us not forget to celebrate his extraordinary life. His life, his words, and his leadership have motivated millions (including myself) to live up to his example of strength, forgiveness, courage, freedom, and dignity.

So, in honor of the man who gave hope to generations of South Africans and inspired many others around the globe to become better people, here are 7 lessons from Nelson Mandela’s life that will endure long after his passing.

#1 How you start is not as important as how you finish.

Do not judge me by my successes, judge me by how many times I fell down and got back up again.

Nelson Mandela began his political career as a freedom fighter, encouraging nonviolent protests as a means of changing the political climate of apartheid in South Africa. But after 9 years of peaceful protests that weren’t making any visible difference, Mandela and his organization resorted to violence to try to make the government rethink its position on race relations. After he was implicated in the sabotage that his organization, the ANC, carried out against the South African government, he went into hiding for 17 months before he was arrested in 1962 and eventually convicted of organizing sabotage and violent revolution. He and his cohorts were sentenced to life imprisonment on Robben Island in 1963.

Mandela’s story would not end there, though. He and his political partners resolved to keep their organization intact while in exile, and Mandela summoned the inner strength to hold steadfast to his principles of self-respect and self-control even in the midst of the most dire of circumstances. 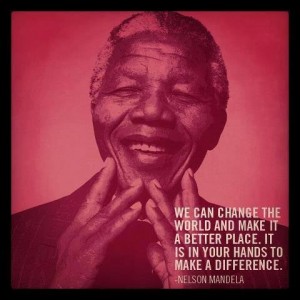 While Mandela was holding out hope on Robben Island, the world was beginning to notice the atrocities perpetrated upon the people of South Africa because of apartheid. Under intense international pressure, the president of South Africa gave way to world opinion and released Nelson Mandela from prison in 1990 – 27 years after he was first imprisoned.

He resumed his role as a political leader, but his strategy had changed. He took on the political systems of the day by connecting and negotiating with them, instead of fighting them from afar. He tirelessly campaigned for the dissolution of apartheid and the opportunity for the people vote democratically for their president. And in 1994, Nelson Mandela was elected by the people as their first black president.

Mandela went on as president to accomplish many great things, but the enduring lesson of this overview of his life still remains for all of us. He could have given up on his dreams. He could have decided that he was too old to continue his career as a leader. He could have made any number of pedestrian excuses that would have prevented him from growing into his greatness. But instead, he chose to finish what he started. He decided that his latter would be greater than his former. He taught us that how you start is not as important as how you finish.

#2 Forgiveness paves the path to freedom.

Resentment is like drinking poison and then hoping it will kill your enemies.

Everyone who has experienced the sting of rejection, betrayal or injustice has had the opportunity to become bitter and resentful of their circumstances and of the ones whom they perceive caused them. But the best of us learn how to let go and forgive those who’ve wronged us and live beyond the petty demands of personal revenge.

“As I walked out the door toward the gate that would lead to my freedom, I knew if I didn’t leave my bitterness and hatred behind, I’d still be in prison,” Mandela said after he was freed from prison in 1990. And it’s the same for all of us.

Mandel’s life taught us that forgiveness is the only way any of us can truly be free.

#3 Fear is ordinary. Courage is extraordinary.

I learned that courage was not the absence of fear, but the triumph over it. The brave man is not he who does not feel afraid, but he who conquers that fear.

Keep calm and carry on, would have been a good motto for Mandela. There are many stories of his life that talk of his courage in the face of fear. But Mandela’s observation of the reality of fear is what’s most important.

All of us feel fearful at times. But the great ones are those who feel the fear and do it anyway. Mandela’s example taught us that it’s okay to feel afraid as long as it doesn’t stop you from doing what you’re afraid of.

#4 Difficulties can break us or make us.

Difficulties break some men but make others. No axe is sharp enough to cut the soul of a sinner who keeps on trying, one armed with the hope that he will rise even in the end.

All of us at some time or another will be challenged by adversity. It’s how we perceive what’s happening to us, though, that makes the difference. If we see difficulty as something that’s impassable then we’ll lose our resolve and quit on our way to achieving greatness. But if we see obstacles as opportunities to respond in bigger ways and not them stop us from accomplishing our goals, then we’ll have become a stronger character that will not easily be broken.

Mandela’s life taught us that on our path of purpose adversity is inevitable but overcoming it is a choice. 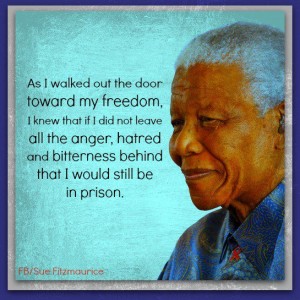 When Mandela was released from prison in 1990, he was still unwavering in his commitment to the abolishment of apartheid. He was unrelenting in his international campaign against the South African establishment and after 27 years in exile and 4 years of rallying he wasn’t sure his dream would ever become a reality. But, as he said, “It always seems impossible until it’s done.”

This is perhaps his shortest and most powerful quote, and the one I have hanging on my office wall. All of us are met with challenges that seem to make our dreams impossible to achieve. Sometimes facing the anxieties of the challenge are more difficult than the challenge itself. But once we begin to take action and place one foot in front of the other, moving forward towards the fulfillment of our dreams, then impossible becomes a word we leave behind in favor of the word “done.”

Thank you, Madiba, for this enduring lesson.

Real leaders must be ready to sacrifice all for the freedom of their people.

Maybe one of the reasons Nelson Mandela’s life spoke so loudly was because of his example of true leadership in a world full of posers. He carried the vision of freedom for the people of South Africa within his heart and lived that mission until it’s completion. He knew the costs of pursuing this dream and did it anyway. At the end of the massive trial that led to his 27-year imprisonment, Mandela made his most historic speech, a four-hour exposition of his political philosophy and development, and his ideal of democracy, concluding with the words: “It is an ideal for which I am prepared to die.”

Another great leader, Dr. Martin Luther King, Jr. who died for the cause of freedom, was once quoted as saying, “If a man has not found something worth dying for, he is not fit to live.” The fact that these great leaders shared the common ideal that self-sacrifice was the mark of true leadership is hardly a coincidence.

Mandela’s fidelity to his purpose should give us pause and begs the question: What are the ideals for which we are prepared to die to see fulfilled?

#7 Lead a life worthy of your calling.

If I had my time over I would do the same again. So would any man who dares call himself a man.

This challenging quote reminds us that we should live a life of no regrets. And, we are to assume from his own words, that Nelson Mandela was a man of few, if any.

May we all learn from the lessons of this extraordinary man’s life in the years to come. And may we all lead a life worthy of our callings as men, women, husbands, wives, fathers, mothers, and leaders so that we can say at the end of our own journeys, “I’ve got no regrets.” 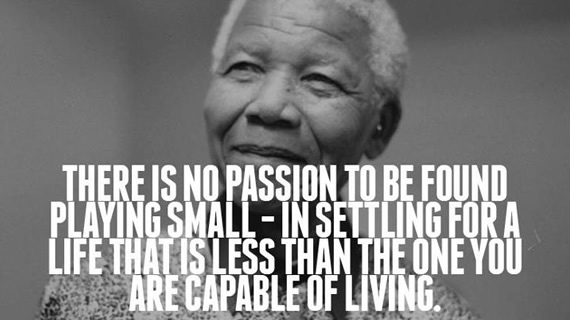 Thank you, Nelson Mandela for your life and your leadership. You will be missed but never forgotten.

Question: In what ways did Nelson Mandela’s life influence yours? You can leave a comment by clicking here.