We are having a major crisis in our world today. A crisis of leadership. There exist so few real leaders who are actually producing the changes that are needed to shape our future in a direction that actually benefits us all, that it’s become a dire situation with long-reaching consequences and requires action now in order for our world to have a chance at a better tomorrow.

Sure, there are many of those who call themselves leaders today (maybe more than ever) but so few of them are true to the function of that title. They are ego-driven, selfish, and greedy in their attempt to control others for their own personal gain. True leaders are those who are selflessly committed to creating lasting change in themselves for the benefit of others. They inspire the greatness within other human beings and help them do and be more than they ever thought possible.

The mark of a true leader is their ability to create change that lasts. Think about the lasting effects of leaders like Gandhi, Maria Montessori, Dr. Martin Luther King, Jr., Lao Tzu, Mother Teresa, and Jesus. These leaders have legacies that have endured the test of time because they were able to create lasting changes in the landscape of humanity that helped everyone get better, and that’s the kind of leadership we need so desperately today.

If you’re a leader then you are tasked with the challenge of making change a reality. But if change isn’t happening for you the way you desire, then take a look at these three huge reasons why leaders fail to produce change.

#1 Treating People as Numbers Instead of Names

When the Nazis took the Jews captive, what was one of the first things they did to them? During check-in at the concentration and work camps they gave them a prisoner’s number and never again referred to them by name. The Nazis were doing something consciously to dehumanize their subjects that many leaders today are doing unconsciously. 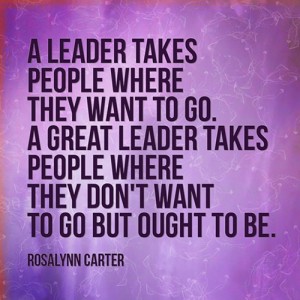 No one likes feeling as though they are anything less than human. But that’s the way so many modern companies and organizations treat their employees. We see it in the cold way employees are expected to produce at a rapid rate with little or no regard for their life outside of work. We see it in the way so many people are tossed aside for the betterment of the bottom line. And we see it the growing disparity between the rich and the poor.

When you care enough to remember and use other people’s names, you are setting a standard for those who are supported by you that places people as a higher priority than money. And in the new economy, connection is increasingly the only thing that matters.

What can you do today to show those you lead that you care by treating them as names instead of numbers?

#2 Communicating by Telling Instead of Teaching

I recently saw an episode of Restaurant: Impossible with Chef Robert Irvine where he was tasked with turning around a failing restaurant in just two days. Tall order, for sure, but what became glaringly apparent to him after observing a lunch service in action was that the employees had no idea what they were doing. They were all being told by the owner what to do but were not being taught the proper way to do it.

If the leader’s job is to create a legacy of lasting change, exactly how is that going to be accomplished? By teaching others how to serve at their own highest levels and passing it on. Many leaders today feel so trapped by the deadlines and daily productivity reports that they sacrifice the people that are supposed to be helping them accomplish the mission by constantly barking orders at them instead of helping them learn how to meet the goal together. The results are a team that feels divided and competitive, a leader who is not respected, and an underperforming department or business that puts everyone’s job in jeopardy.

When leaders take the task of teaching seriously then showing others HOW to accomplish something becomes much more important than telling them WHAT to do. Think about it…when was the last time you were upset at not knowing what to do? It wasn’t that you didn’t know what to do, it was that you didn’t know how to do it, right?

What can you do today to teach your team how to make things happen instead of telling them what they should be doing?

True leaders are problem solvers. In our world, though, we are so caught up in the idea of instant gratification that our solutions to problems in the moment create even larger problems that are felt in the distant future. 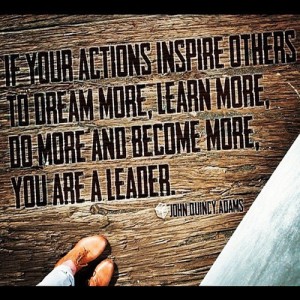 Take our bodies, for example. We know they are complex systems of biological wonder, but we treat them as though they are simple cause and effect machines. When someone gets a headache, for instance, they want the pain to stop now! So, they take an aspirin or acetaminophen and wait for the pain to stop. Of course, that’s not solving any problems, it’s just masking the symptoms. In order for the problem to really cease, this person will have to look for the underlying issues in their body’s systems. But will they?

Many leaders today are so entrenched in the system they’re trying to change that it’s very difficult for them to produce any results that last longer than a short while. The systems become so complex and overlapping that it’s increasingly difficult to identify the source of the real problems. But when great leaders emerge, it’s because they’ve helped people see the greater good in going to the source to sustain a new future instead of taking an aspirin for the pain.

A great example of this type of leadership is President Franklin Roosevelt when he went to the airwaves on March 12, 1933, to explain the 4-day “banking holiday” that was being instituted across the nation. In a time of national panic, he calmly explained how the banking system worked at a structural level, and why closing the banks for four days was necessary to restore order. He was able to generate massive support for a radical and necessary action by addressing the underlying source of the problems.

What problems are you facing today that you need to address systemically instead of symptomatically?

In order for true leaders to emerge and have real lasting impact on the world then the change they create must overcome obstacles and stand the test of time. The good news is producing lasting change is not a miraculous and unrepeatable process, it’s a science that’s grounded in firm principles.