Sometimes it feels like all we have to do is wake up and we’re having relationship conflict in our world. There seems to be no end to all the tension we’ve created in our marriages, our families, and our friendships. The worst part is, we keep doing the same things everyday and expecting something different to happen as a result. So, maybe it’s time to start thinking differently about the source of our conflict.

What if you could relieve all the relationship tension you’re struggling with by interrupting the #1 most destructive thinking pattern that always results in conflict? And what if you could end a very large percentage of personal conflict just by remembering to ask yourself one question?

You can, and here’s how…

Disagreement is inevitable. Conflict is a choice.

If you talk to people at any time during your day then there exists the opportunity for conflict. Disagreement usually arises between two people when there exist differences in opinion or preference. Conflict can only happen, though, when one or both of the disagreeing parties makes a shift in the way they see the other person.

When I was growing up and going through the dreaded puberty phase of life as a young man, I remember being extremely attracted and distracted by the female form (as most young men are). Sitting through long and boring lectures in high school, I’d take the opportunity to sneak a peek at the girls in their desks and stare at their bodies as I daydreamed about touching them (it almost made high school bearable). But, one day, as I was talking to a group of female friends I was listening to what bothered them most about us boys and they all agreed that they couldn’t stand feeling like “a piece of meat” to be gawked at and disliked very much the fact that most boys couldn’t even hold a conversation with them while looking them in the eyes since they were too busy looking down at their breasts. Yikes!

I realized then, as all men must now, that in order for the women around me to feel comfortable and open, they needed to be seen as human beings and not sexual objects. So, I made the decision to see them as people instead of objects in order to give the same respect to the women around me that I would like to receive from them.

Why did I tell you that? Because this same shift from person to object is what happens in the middle of every disagreement that escalates into a conflict. Disagreement is the inevitable consequence of talking to another person. Everyone has different opinions, beliefs, and thoughts about certain things. But conflict happens when we make the choice to see them as an object instead of the person they really are. So, what are you seeing?

What are you seeing?

At a basic level, there are only two ways to see others – as people or as objects. 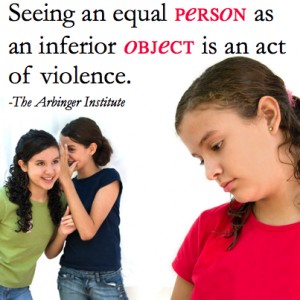 When we choose to see others as people with their own hopes, dreams, aspirations, issues, opinions, and beliefs we alleviate the need to be “right” in our own eyes. We don’t tend toward argument to solve our problems, instead, we collaborate to find solutions together in an attempt to understand and appreciate the other person’s world.

If we only see the people around us as problems, projects, or prizes then we’re missing out on their humanity and expecting everyone around us to bend to our will instead of honoring the will in them to choose their own preferences in life. Expectations are the issue here.

The equation looks like this: life conditions = life expectations

Our self-focused tendency is to bring the equation back into balance by changing the conditions (i.e. – persuading the other person to see things our way). When that doesn’t work, then we begin to see them as something instead of someone and reach deep into our bag of tricks in order to manipulate them into what we want.

But we could just as easily have made the decision to alter our own expectations of the situation, therefore bringing the equation back into balance ourselves. This, of course, requires us to be present in the moment and stay aware of every decision we’re making in the conversation. But the pain of disciplining ourselves to operate this way is much lesser than the pain of the regret we feel after objectifying someone and escalating conflict based on how we wish they would be instead of accepting them as they are.

Manipulate yourself, not others.

So much of what’s happening in our relationships comes down to manipulation. But maybe if we invested all the energy that we’re expending on manipulating those around us into manipulating ourselves to meet the needs of every situation we encounter with others, we would see more positive return. 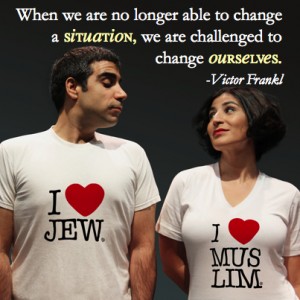 One of the biggest breakthroughs I’ve had personally and one that I’ve walked many of my clients through in coaching relationships is the shift in seeing our parents as people. Many of us grow up with ideals of what the perfect parents should be. When we get older, we begin to see how our parents made lots of mistakes and caused lots of pain in our lives as a result their bad decisions. What we’re left with is this unbalanced equation of conditions and expectations that have us angry and focused on what our parents should have done to make our lives better.

The breakthrough comes, though, by shifting our perspective of our parents and seeing them as people instead of problems. They too had hopes and dreams and aspirations for what they wanted out of life and they also had to learn the hard way through decisions and experiences just like us. They’re not perfect, never have been. So why are we expecting perfection? The only things that are made to function perfectly are machines. Our parents aren’t machines, though, and neither are we. So perfection can’t be expected. When we begin to see our parents as people and quit objectifying them as something other than human, then we can understand and appreciate their world more fully and accept them as they are instead of who we wish they were.

I’m going to encourage you to take this simple step for yourself today. Look at the conflicts you’re having in your life right now as an opportunity for you to grow. Decide to see others as the people that they really are instead of the people you wish they would be. And change what you expect from them in order to keep the peace in your relationships.

Will it be easy, no. But it doesn’t have to be hard, either.

When you see a person instead of an object, you can easily shift what you expect.

3 thoughts on “Solving The Source of Conflict”