It was heartbreaking, for sure, to watch these guys fight to the finish and just not have enough in the tank to take down the Boston Red Sox. It’s always hard to watch someone set out to make their dream a reality and come up short. But, like all great teams, organizations, companies, families, couples, and individuals already know, losing is never the end of anything if you’ve learned something from the experience.

So, when you lose, do you learn from your experience? Or do you just feel the pain of the failure? It might not seem like a life-changing question, but it can mean the difference between giving up on your dreams or making them a reality.

Are You Afraid To Fail?

Nobody likes to fail. In fact, our world hates it so much that we’ve placed a premium on children from a young age to be perfect (without flaws or defects) in their academic skills. You get rewarded for being right with stickers on your sheets, “A”s on your report card, honor roll inclusions, and “student of the month” awards. And you get punished for being wrong with “C”s, “D”s, and “F”s on your report card, the endless questions from your teachers and parents about why you’re not performing as well as the other kids your age, and the dreaded labels that come with being the kid who’s a little “slower” than the rest. 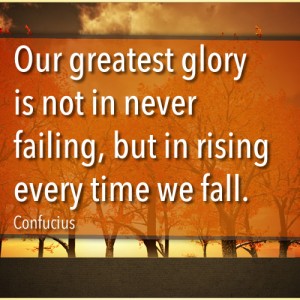 In this type of environment who would ever desire to fail? No one. And that’s the problem.

Failure is how we learn. It is in the trying and failing that we modify our actions and make things better. If we’re afraid of failure, then we’ll never risk trying anything new and we’ll never discover what we’re capable of.

Thomas Edison was told by his teachers that he was “too stupid to learn anything” and was fired from his first two jobs because he was “non-productive.” As an inventor, he famously failed over 1,000 times before succeeding in making the incandescent light bulb. When asked by a young reporter, “How did it feel to fail 1,000 times?” He replied, “I didn’t fail 1,000 times. The light bulb was an invention with 1,000 steps.”

When it comes to your dreams, are you going after them with the mindset that you’re going to succeed eventually if you keep going in the same direction and modifying your strategy based on what you’re learning? Or are you content to sit and wait until you’re “ready” for them to take place and your dreams come to life with no failures at all? 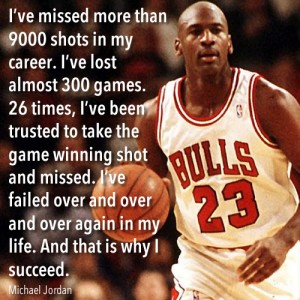 I always laugh when I hear other couples say, “We just want to be “ready” to have children.” I usually ask them, “If it’s your dream to have children, then why would you put it on hold until you’re ‘ready?’” And what does “ready” look like? Feel like? How will you know when you are “ready” for children?”

After I’ve asked them those questions I’ll usually follow it up with, “There’s no such thing as “ready” for children, friends. Children are disruptive, time-consuming, and life-changing. But so are dreams. And just like dreams that come true, there’s always pain in the process but there’s also joy in the journey.”

The reality is, there’s no such thing as “ready.” Clarity comes while we’re in the process of doing something, not while we’re thinking about it. If we allow ourselves to sit too long on the sidelines because we’re avoiding the pain of failure, then we’ll stay there forever and never live the life of our dreams.

So what? The Cardinals lost the World Series for the fourth time since I’ve been alive to watch them. I’m sure they’ll be back there again soon, playing for the opportunity to win it all, because they know something that you should too – you win some, you learn some.

Question: How do you fail forward when you miss the mark in your life? You can leave a comment by clicking here.

2 thoughts on “You Win Some, You Learn Some”