So what if I were to tell you that there’s only one thing you must do to massively increase your influence today? And what if that one thing was so simple that you could change it without any real mind-blowing effort on your part?

Sound interesting? Then read on to discover how to massively increase your influence in every relationship today!

Life has a habit of coming at us in a very forthright fashion. Facts present themselves directly and forcefully, often jarring us off-balance and eliciting an equally unbalanced reaction.

For example, this weekend my family and I were having breakfast at a local restaurant and at the table next to us sat a dad with his infant daughter and teenaged son. While we were waiting for our food I heard this dad launch into his son about his listening skills by saying, “This is exactly the same problem that your teachers are telling me they’re having with you at school! You don’t listen! You’re going to be broke and jobless one day all because you can’t pay attention long enough for anything useful to get through. It makes me embarrassed to be your dad.” Ouch. 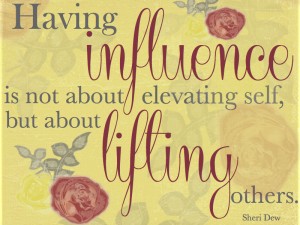 What happened here? Well, I’m guessing dad had been hearing for some time now about how his son was having trouble listening in class and how it was inevitably affecting his grades. When dad was presented with an opportunity to see his son’s perceived lack of listening skills in-person at the breakfast table, the force of those facts coupled with his own belief in how he thinks his child should behave brought about the ensuing verbal assault.

The problem is, this dad desires influence with his son but instead, has settled for control. Control is the act of forcing our responsibility on others by using words that elicit fear, guilt, and condemnation in order to get the other party to take from us what we feel we are inadequate to handle on our own. This dad, like many other parents, spouses, bosses, teachers, etc. felt insecure about his ability to make his son into the person he thought he should be, so he lashed out in hopes of scaring his son back onto the path that he thinks is right.

Now, here’s the thing. I’m sure this dad did not have the intention to set his son on a course of self-destruction by saying these things. But, as the saying goes, the road to hell is paved with good intentions, right? Intention does not determine your direction in life, your decisions do. So what could this dad have decided to do instead of speaking harshly to his son that would have changed the outcome of this conversation and increased his influence with his child?

Many times in our lives we are faced with the challenge of seeing something going wrong in someone else’s life and deciding if we should say something about what we see or just keep our mouths shut and hope that they’ll eventually find their way. But there’s a third, and often overlooked option, that will increase the opportunity to influence any situation no matter the subject.

When we tell others what we think about their situation and what we think they should do, what normally happens? Well, what happens when people do that to you? Do you listen intently, seeking to apply their wisdom to your life, hoping that this distinction they’re sharing with you will be the one that will change everything for you? NO! You resist because you don’t really care for anyone telling you what to do. And, by the way, neither does anyone else.

So, instead of telling someone what you think about how they’re behaving or what you think they could or should do to solve their problem, what can you do to level up your influence and remove yourself from being seen as the controller? Stay curious and ask questions.

What would have happened if that dad had stayed curious in that interaction with his son and asked some powerful questions instead of offering his harshly-worded advice? Well, it might have gone something like this:

Dad: I’ve noticed that you didn’t hear me a couple of times this morning. Are your ears okay?

Dad: Nothing? Nothing at all? Not even a little bit of something? Anything?

Dad: Oh, and does that make it hard to pay attention?

Dad: Is that what makes it hard to pay attention in class, too?

Son: Yeah, Dad. But my teachers don’t get it…

You get the picture. Now, this dad has discovered that the real problem can now be defined in solvable terms and ask his son more questions until he discovers the solutions on his own.

So, there’s the secret. By utilizing this simple approach to any conversation you too can increase your level of influence and affect change on a large scale. Just remember to stay curious, ask questions, and allow those around you to arrive at their own conclusions. You’ll be amazed at the results, I promise.

Take the opportunity today to consciously make the effort to stay curious and keep asking questions in a conversation with someone close to you (spouse, child, family member, close friend, etc.) What did you notice about the interaction? How did it make you feel? How did the other person respond? Did you notice your influence increasing as the conversation continued? Why or why not?