One of the most common limiting factors that I see in many people’s lives is their beliefs about their destiny. For so many people, this word has been loaded with mystical meaning and therefore is only understood by the spiritual elite. As a result, many just leave the direction of their lives to a higher power and live day to day waiting for something to happen that will cause them to live a better life.

But is that the truth about destiny? Is it really a mystical force that shapes our lives unconsciously and delivers us down a path of its choosing? Or is it something much more simple that is controlling the direction of our lives?

Read on to discover the truth about your destiny.

Destiny is one of those words that means many different things to many different people. For some, it means the force of fate that controls the universe and shapes our lives. For others, it means the ultimate plan of God that our lives have been scripted to perform. And for many, it has little or no meaning because they don’t live their lives in deference to a higher power. 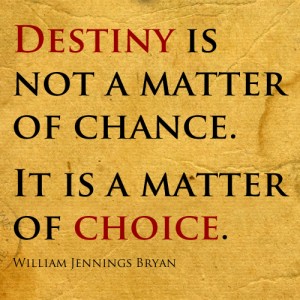 Destiny comes from the same root word in Latin that gives us the word “destination.” Simply put, destiny is another way of saying where your path is taking you. And what directs our paths in life? God? Fate? Chance? Or is it something else?

If we’re being honest with ourselves we all know the uncomfortable truth that confronts every human being on this planet is that our decisions control our destiny. But for many reasons, we don’t want to admit it.

Obviously, you can see how this truth that our decisions determine our destiny comes into massive conflict with the belief that so many of us hold dear that God or the Universe is orchestrating the circumstances of our lives. But in the end, who’s the responsible party for where you’re going? Is it God who placed you on this path or is it you?

Who’s responsible for where you’re going?

Think about it. When was the last time you heard someone talking about their circumstances say something like, “I don’t know how this happened!” All the time, right? And it’s usually when things are going poorly and they’ve made some decisions that carried serious consequences into their lives.

When we believe that something other than ourselves is controlling our destiny then we give ourselves the excuse to keep on making the same decisions and hoping for different results. And that, as famously defined by Albert Einstein, is insanity. 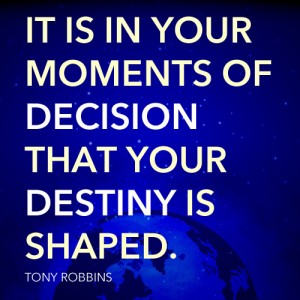 For example, I caught half an episode of Teen Mom 3 while flipping through the channels in my hotel room the other day. Now, it doesn’t take a rocket scientist to figure out how these young men and women found themselves on this path. They made a lot of tiny decisions that led up to the moment when they decided to have unprotected sex with one another and then found themselves saddled with the responsibility of parenthood.

But did they stop the madness of their poor decision making after they had babies? Of course not! Because who wants to take personal responsibility for their decisions when they can blame them on someone or something else? Right?

Right. And that’s human condition, friends. Left unchecked, we’ll blame just about anything around us instead of taking personal responsibility for our futures. Unfortunately, many of us only realize the truth that is was our decisions that determined our destiny far too late to change the consequences of our actions.

So, where is your path taking you? Are you happy with where your life is headed or is it time for a course correction? The truth is, it’s up to you.

3 thoughts on “The Truth About Destiny”